Tell our readers a little bit about yourself… not something they’ll get from your bio… just about you in general!

I’m one of the only openly transgender crime fiction authors. While being trans these days is more accepted, it wasn’t when I transitioned 25 years ago in the Deep South. I lost everything—my marriage, my family, my friends, my job, my home, and certainly my church.

But I also gained a lot, too. I learned to love and accept myself in a very deep and profound way. I learned a lot about human interaction, especially how people of all minorities are othered. I found strengths I didn’t know I had and met people I wouldn’t otherwise have met.

And all of the challenges and violence and humiliation that I endured is fodder for my creative writing.

Tell me about your books. What do you write? What’s your preferred genre (or topic, if nonfiction), and what drew you to write it?

I like to write about people who are othered, people who are fighting against an often hostile, apathetic, and sometimes violent world. I write about people facing situations where there simply is no right answer, no good solution.  This includes trans people and gay people and people of color. It also includes addicts and gangsters and sex workers and undocumented immigrants.

Most of what I write is crime fiction. But the focus isn’t so much on the crimes as it is on the complexity of the characters trying to deal with tough circumstances beyond their control.

I explore a lot with identity and choices and the human capacity for both compassion and cruelty, love and apathy.

Who is your favorite character you’ve ever written about, and why? 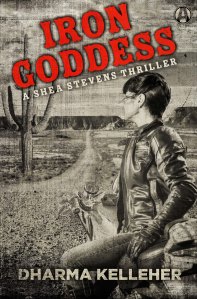 It’s tough to choose, but if I have to, I’d select Shea Stevens, who is the protagonist of my current thriller series. She’s tough, resourceful, and struggling with all kinds of demons. Her father ran a local outlaw biker gang until he was sent to prison for murdering her mother. Shea herself is a motorcycle builder and former car thief. She has a lot of skills, not all of them legal. But she does what she can to protect the people she cares about, no matter the personal cost.

Writing is tough, and finishing projects is even tougher. What drives you to write? Why/when did you start writing?

As I mentioned earlier, I first started writing as a teenager. But I didn’t get back to it until about ten years ago when someone invited me to participate in National Novel Writing Month. After winning NaNoWriMo, I was hooked.

Part of my motivation was that most of the queer fiction I found was either coming out stories, romances, erotica, and cozy murder mysteries. But like as a queer person is about more than coming out, falling in love, having sex, and stumbling over dead bodies. I wanted stories about queer people that didn’t center around the character’s queerness or love life. Sci-fi stories. Fantasy stories. Thriller stories.

Since I couldn’t find the stories I wanted to read, I started writing them.

I write exciting, gritty stories about renegades, outlaws, and misfits.

What would you say has been the hardest part of being an author?

What has been the best or easiest part?

The best part is talking with fans and networking with other writers. There is so much amazing creativity out there.

I also love the research. For my upcoming novel, I had the rare opportunity to speak with the president of an international motorcycle club. I can’t mention which one, but they are well known and have a strong presence here in Phoenix. Reaching out to them was one of the scariest things I’ve ever done because the MC (motorcycle club) world is very private and often violent. But everyone I spoke with was very polite and respectful.

What do you do when you find the words just won’t come to you?

I change the location where I’m writing. I may do some freewriting either about a scene or a character or a plot point. I may switch from writing on Scrivener to writing on MS Word or by hand. Anything to get my head in a different space and see the situation from a new point of view.

We all have those things that keep us going… what keeps you coming back to your manuscripts? Is it a process? Do you set goals for yourself? Are you purely inspiration driven? Pacts with aliens? What is it?

I’m not allowed to talk about my pacts with the aliens, however, my primary motivation is creating stories that entertain people while helping them to see the world from a different point of view. And as often as not, I end up seeing the world from a new perspective, as well.

What do you love about the genre you write and what others appeal to you?

Writing hardcore crime fiction is very cathartic. Feeling down? Kill off a villain in a brutal way. Write a car chase or a fight scene. It’s a lot like when we played cops and robbers as a kid.

What can we expect from you next? Tell us about the plans for your books. 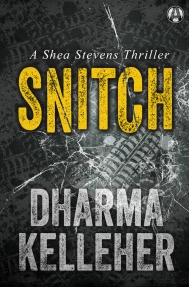 Snitch, the second book in the Shea Stevens thriller series comes out on January 31, 2017, from my publisher Alibi/Random House. Also, I’ve written a prequel Shea Stevens short story which is only available to people who preorder Snitch and email their receipt to dharmapromo@gmail.com.

My first two books are traditionally published. I plan to self-publish the third book in the Shea Stevens series. I am also working on a new gritty thriller series about a female bounty hunter, which I hope my agent can sell to a traditional publisher.

I think indie publishing is a great opportunity, but it must be treated seriously and professionally. That means investing in a professional editor, a professional cover artist, and a professional formatter. If that means you have to do a crowdfunding campaign or a garage sale to pay for it do it.

Otherwise, you will put out a shoddy book. And that further stigmatizes indie authors. You waste the readers’ money AND their time spent reading. Readers might buy the first book, but they won’t give it a good review, they won’t recommend it to their friends, and they won’t buy the next one.

So if you want to be your own publisher, do yourself and everyone else a favor. Do what professional publishers do. They hire other professionals to help them create a quality book.

Who is your favorite character from a book you didn’t write, and why?

My favorite character is Lisbeth Salander from Stieg Larsson’s Millennium series (The Girl with the Dragon Tattoo, et al). She’s tough, anti-social, and wicked smart with her own sense of justice. She was a bit of an inspiration for my Shea Stevens character.

What are you working on currently and when can we expect to see it hit the shelves (physical or virtual shelves, that is)?

As I mentioned above, Snitch: A Shea Stevens Thriller comes out on January 31, 2017. It will be available on Amazon, Barnes & Noble, Kobo, and other fine e-book retailers. After that I will be working on book three in the Shea Stevens series, as well as the bounty hunter series.

Lastly, tell us where to find you: 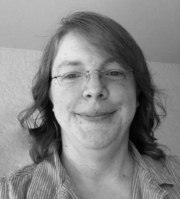 Dharma Kelleher writes gritty tales about outlaws, renegades, and misfits. Her debut thriller IRON GODDESS was published by Alibi in June 2016. The second book in the series, SNITCH, will be released in January 2017. Her work has also appeared in Shotgun Honey.

Her hobbies include riding motorcycles, picking locks, and getting inked. Learn more about her and her writing at dharmakelleher.com.