Today’s Author Blog Challenge requests that I divulge the inspiration for my novel. I have a few works-in-progress, but my flagship – The Adept Cycle – is the one I’ll discuss here.

All I can say is, grab some popcorn and be prepared to laugh. You know… at me.  Whatever. What you’re about to read here happened. To me. For reals. I still think it was a prank… or was it. LOL  *gulp* Okay… here goes nothing… 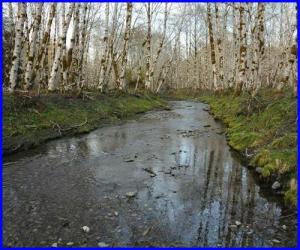 Many years ago, when I was a young teenager, we frequently visited my uncle in Astoria, Oregon. His family lived in an older farm house with bare, wood floors and one pellet stove for climate control. My uncle – a mathematical genius – worked as the chief city planner. Every time we visited, he’d give me the history of some famous mathematician or scientist, including the discoveries they made, how their theorems and formulas are still in use, and why it’s so important to not just know how to do math, but to understand why people are compelled to study it. My aunt spent her hours gardening, canning, clipping coupons, hunting, chopping firewood and mastering the art of shopping without spending money (no joke). She gave me my love for mangos and an appreciation for self sufficiency.

My cousins were both eager fans of science fiction and fantasy. They introduced me to Dungeons & Dragons, Monty Python, and a whole host of legends and lore regarding their home town of Astoria.

My younger cousin – equal in age to myself – was the master of wild flights of imagination.

And he was very convincing.

It was his story, and my part in it, that followed me through the years, begging me to write from the seed of inspiration planted on Thanksgiving weekend when I was thirteen years old.

The rain never stops in Astoria. That cold, wet, November morning was just like any other. Emerald fields of grass lay shrouded in low fog with a persistent drizzle that hardly warranted an umbrella, yet left us soaked after our ten minute walk.

We emerged from the trail into a clearing… Red alder trees lined the perimeter. The soft ground had been turned at one point by the tractor that sat abandoned by the tiny, dilapidated house at the far end of the clearing. Mounds of fallen leaves squished under my rain boots as we crossed the tree line.

“Does someone live here?” I asked. “Are we trespassing?” As a kid, I followed rules to a fault.

“That’s what I’ve been telling you. Someone did live here. But they sold it. That tractor there was brought in to demolish the house.” He pointed off at the rusting cage of metal that failed at resisting time and the elements. “But the work just… stopped. Three years ago. Stopped. No one has been up here since. No one except me and Danny*.”

“And now you think–”

“You’re telling me… a werewolf lives here now.” I crossed my arms and stopped, half-way across the field.

“These trees,” he waved an arm in circular fashion, indicating the ring around the meadow, “they must have some sort of power. I think maybe they help it control when it changes.”

I laughed out loud. “You’ve been playing way too much D&D.”

I shrugged and plodded onward, toward the tractor.

“Look here,” my cousin said once we reached the broken-down mass of metal. “Claw marks.”

I cocked my head to the side, examining the scratches along the lift arm of the front loader. “Could just be from scraping up against rocks and stuff,” I offered.

He shook his head, “Look at it.” He drew his fingers over the marks in an attempt to illustrate the pattern. “It’s too uniform.”

“And this is all you have? This is supposed to prove there’s a werewolf running around Astoria?”

“No. Over here.” He walked toward the house.

“We really shouldn’t go into an abandoned house,” I said, holding back.

“We’re not going in. You can see what you need to see from the front window.”

I hesitated for a moment, letting my hand fall over the marking again. Giving the tractor a pat, I reluctantly followed my cousin to the front window of the house.

The glass was long-since broken out, and the roof sagged. The floor inside showed traces of mold where rainwater had made itself at home.

“Up there, above the fireplace.”

A wooden plaque hung askew, decorated with five arrows in a star pattern, tip to fletch.

“Looks like something out of a road-side shit shop.” I said.

“It’s alder, same as the trees. And the tips are silver.”

I gave him a sideways glance. “And you know this because…”

“Danny. His dad’s a carpenter. He knows wood. He went in and checked, close up. And see how the tips are tarnished? Silver.”

“Uh, huh. So, if silver kills werewolves, why would he have it in his house?”

My cousin grinned and waggled a finger. “Yes. I asked myself that same question. Think about it. Guns kill people, but lots of people have them… for self-protection.” I didn’t offer a response, so he continued, “Maybe our wolf is up against a rival pack. Or maybe the combination of silver and alder somehow protects him against the moon, or helps him control when he changes.”

I peeked into the window again, searching for any sign of the place being inhabited. “Looks like no one has been here for a long time. You really–”

“It’s behind the house,” my cousin whispered, his pupils becoming black saucers. “RUN!”

My heart hammered in my chest as I tore off across the meadow. My cousin — who really could do for some team sports — trailed me, but called out from behind, “Head for the creek! It won’t be able to cross the running water!”

I ran through the woods, feeling the sting of cold rain on my skin. Leaping over the small stream, I skidded to a stop and spun around. My cousin followed, nearly crashing into me. He bent over, hands on knees, huffing steamy breath. “I think we lost it.”

I punched him in the arm. “Asshole!”

“That was Danny and you know it! You guys are a couple of jerks!”

My cousin threw his arms up in surrender. “I swear, it wasn’t! Danny is in California this weekend. Thanksgiving, remember?”

My cousin swore that the letter opener I clutched under my pillow was pure silver. I was almost certain it was a two-dollar office supply. But it offered a modicum of comfort. I wrapped my fingers harder around the hilt at every scuff outside that, in my mind, was claws on pavement. Every howl of the wind was a wolf, poised to crash through the bay window over the couch where I slept. I was thankful that the pellet stove had run out of fuel. The cold gave me an excuse to layer myself with blankets and hide in a secure fort of down and wool. At some point, I drifted off to sleep, never releasing the grip on my knife.

Rising is an Urban Fantasy crime adventure that follows special agents Kessa St. James and Danny Harmon on a high-profile murder investigation that leads them down an unexpected path.

Kessa’s lively new partner, Danny Harmon, happens to be an old acquaintance that she would rather avoid. Everything about their reunion and the case before them conjures memories of the horrific prank that Danny played on her when they were teenagers. However, when politics turn personal, and the boundaries of magic and reality overlap, she must face her disbelief and place trust in the demons of her past. Her biggest challenge is learning to have faith in herself and to accept her new role as Adept of the Ancients. As skepticism gives way to acceptance, and reluctant friendship becomes something much deeper, Kessa realizes she must sacrifice everything in order to save those she loves the most.

* I don’t actually remember my cousin’s friend’s name… but Danny is the name of my character in Rising, who fills the shoes of my “cousin’s friend”… quoted because my character is entirely fictional. My aunt, uncle and cousin’s names are redacted to protect the innocence of childhood.

** My character — Danny — would like to interject that while yes, technically he is fictional, he does have feelings and doesn’t like me talking about him like he’s not here.

I’d like to offer a shout-out to Habit Daddy’s post, The Ultimate Cure for Writer’s Block. I love the mind maps… especially the one that looks like synapses and nerve cells 🙂