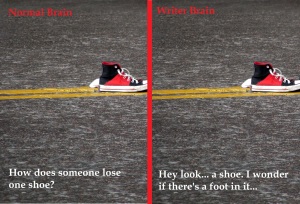 I once had the pleasure of listening to one of my idols, David Morrell, speak.  Someone asked where he gets his inspiration when writing suspense and thrillers, and he offhandedly said, “It’s just how I think.  Like when a normal person sees a single shoe on the side of a road, they think, ‘How could someone lose just one shoe?’  Whereas I think, ‘Hey look… a shoe! I wonder if there’s a foot in it…'”  There was a lot of nervous laughter in the room, but I sat there going, “YES!”  I know exactly what he means.

When I talk to my non-writer friends about my creative process, they tend to look at me like I’m from another planet.  When I discuss the same topic with other writers, they follow right along and nod enthusiastically, because they get it.  They understand what it is to have a full-on, choose-your-own-adventure narrative running 24×7, 365.

My niece responded, “I didn’t think it was a writer brain I just thought I was a crazy person who thought unrealistically.”  I said that she very adeptly defined “writer.”

Without a good heaping of unrealistic thought, we would never be able to create magic on a page.  We have to see life through this filter of what is possible, rather than what is.  Society attempts at every turn to beat it out of us. From the time we are little — “She’s so lost in her imagination! It’s great, but she’s going to have to let go of the fantasies eventually.” — to adulthood — “When are you ever going to grow up?” The hard and fast fact is, if we let go of our unrealistic views of the world, then we lose our gift.  We constantly tell stories, even in our silence.

For example, as I’m going through my day to day, my brain narrates.  If you’ve ever seen the movie Stranger than Fiction, it’s a lot like that. (And if you haven’t… you really should)  My brain narrates my own life. It also narrates the comings and goings of people around me.  Characters are borne from every-day people going about their every-day lives.  My writer’s brain creates events and personalities and interactions that they’d never dream of, all in the split second I see them.

Because I tend to lean toward suspense and supernatural writing, my odd narrations tend to take on sinister aspects sometimes.  Last night was a prime example. I darn near shat myself because: weird guy on the street. And this was WEIRD!

It was dark, and he was equally so, dressed in black from his boots to his sweatshirt, with the hood pulled over his head, even though it was 67 degrees outside. Normally, I wouldn’t bat an eye at such a person, but it was the face that got me: Completely covered in orange LED lights that blinked and twinkled from within the depths of his hood. He walked through the Walgreens parking lot with purpose, and I was certain that many were about to meet an untimely death (or at least, that’s where my writer’s brain took it). I walked through the store, adding characters to the plot… the old man who’d stopped in for a pack of smokes was the first to realize he was a goner. The mother, whose toe-headed daughter would not be contained, would watch helplessly as her child met her fate. I would, of course, leap the pharmacy counter and push the button that closes the metal shutters. Then the pharmacy staff and myself would launch a counter attack….

Seriously… all this while just going to pick up a prescription. I need help.  But I don’t want it.  Instead, I’ll use it, and turn it into works of fiction to be enjoyed by all.  It’s who I am, and I embrace it gladly.  My writer’s brain is a gift, and the more I use it, the happier I am.